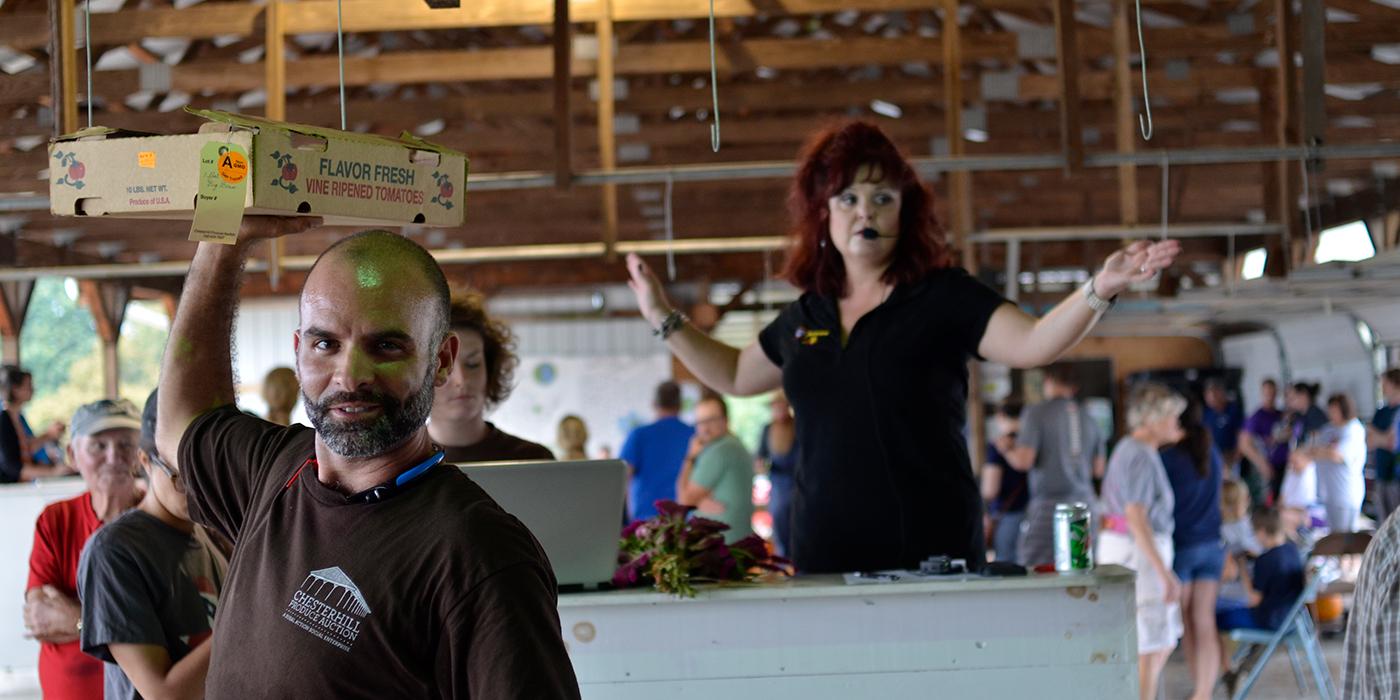 The Chesterhill Produce Auction is a social enterprise and local food hub owned and operated by Rural Action. We sell and distribute fresh, local produce throughout the Mid-Ohio Valley. We are supported by members of Rural Action’s Sustainable Agriculture program, local growers, volunteers, and dedicated local residents. We have regular produce auctions at 4 PM every Monday and Thursday, May through October, as well as several specialty auctions and consignment auctions. Our full schedule can be found here.

What Is a Produce Auction?

Produce auctions are markets where fresh fruits and vegetables are sold, at auction, often in large quantities, to buyers. Buyers and sellers are issued numbers, the auctioneer sells each “lot,” a clerk records the transactions, customers pay at the end of the auction, and growers are given weekly checks for what they sell. The Chesterhill Produce Auction deducts a commission from the sellers to pay its expenses, like utilities, insurance, staff, and advertising.

Every Monday and Thursday, produce is brought in on horse-drawn buggies, in cars and on trucks. It is laid out on pallets for customers to inspect prior to the auction, creating an impressive bounty.

A produce auction is also a center of aggregation for small growers, so that they may combine their produce to fulfill large orders from nearby restaurants, hospitals, schools and universities.

At its core, a produce auction gets more people access to fresh, local produce and supports the local farmers who grow it. In the words of Chesterhill Produce Auction founder Jean Konkle, “People want and deserve good quality food; just because they live in a remote area doesn’t mean they can’t have good, fresh produce.”

The Chesterhill Produce Auction was founded by Jean and Marvin Konkle in 2004, with the help of numerous growers, community partners, agriculture extension agents, and a committed group of buyers to help it get off the ground. Community involvement has been a part of our story from the beginning—and we still host Growers and CPA Advisory Council meetings every month during the off-season to discuss concerns, successes, growing techniques, and the growth of the auction.

In 2005, the produce auction started under a tent before a driveway and permanent structure were built later in the year. Auction sales grew year after year, and the Konkles continued to add auction dates, improve the property, and expand its customer base to include families, restaurants, and larger institutions. By 2009, gross sales had reached $64,000.

In 2010, the Konkles were ready to retire and Rural Action approached them about purchasing the Chesterhill Produce Auction. With community investors, a loan from the Mountain Association for Community Economic Development, and a grant from the Appalachian Regional Commission, Rural Action purchased the auction and has continued to operate it. We have developed partnerships with local and regional organizations to offer grower education, food donations, and distribution to food insecure areas through our “Country Fresh Stops” program. We also host School Day at the CPA, a yearly field trip for local elementary school students to learn about fresh produce, nutrition, composting, the local food system, and how auctions work.

In recent years, the auction and growers have jointly invested in growing beyond produce auctions. The Chesterhill Produce Auction now features Saturday auctions with specialty hand-made wood products, produce, and small livestock. In 2017, a new pole barn was built to host the livestock auctions and expand capacity. We hope you will continue to join us in upcoming years for more auctions and community gatherings.